Five tumblers from Gryphon West represented the South West team at Fenton Manor, Stoke-On-Trent in May.

Sam Cooke represented in the U19 Girls, taking 4th place, 0.10 off a Bronze medal.

But to highlight the day Ben Cowell in the U14 Boys claimed the Bronze medal position, and Sam helped the SW take the U19 team title.

Coaches were delighted by the gymnasts achievements and feel the season ahead looks very promising. 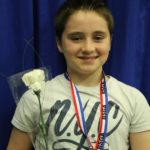